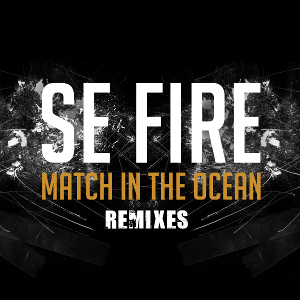 The second single from Bristol-based label Durkle Disco has arrived, featuring remixes from two of the bass-obsessed city’s most exciting and freshest talents – Kahn and Superisk.

The source material comes from the little-known but hugely talented Se Fire collective, whose previously unreleased album ‘Match In The Ocean’ is also released digitally this spring on Durkle Disco. Fusing elements of reggae, soul, trip-hop and much more around a solid hip-hop core, ‘Match In The Ocean’ is a captivating bass-driven listen, from which all three of the original tracks remixed here were taken.

First up steps man-of-the-moment Kahn, fresh from his second release for the hugely respected Punch Drunk label and his recent FACT mix. Kahn’s sublime take on ‘Red Lights’ twists the original into a stuttered two-step groove that nods firmly towards the UK Garage sound of yesteryear, with all the sultry swagger and seductive swing of that sound at its
very best.

Fellow Punch Drunk contributor Superisk comes next, reworking ‘In Every’ into one of his trademark grime inspired slices of bass music. An anxious, string-driven intro builds the tension beneath Se Fire’s dreamily delivered bars, gradually building into a rich synth-laden tapestry of sound and intricate percussion that never lets go.

Finally, Essex’s Fused Forces show there’s still plenty of dub to be found in dubstep with their remix of ‘Steppa’. Showcasing Se Fire’s original bars and cuts throughout, sparse, spacious atmospherics and lashings of reverb open the way for a smoky, head-nodding slice of bass-weight that drips with dubwise attitude.